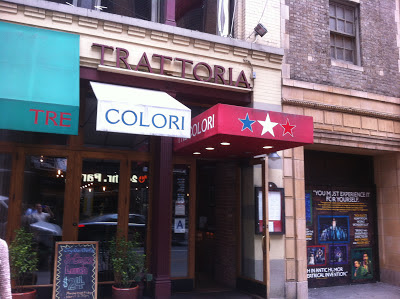 A second visit to the fine city of New York gave Watson and I reason to further investigate whether our first instincts on this Trattoria, neatly hidden away in plain view on 47th St. between Broadway and 8th, were correct. Our first drop in,  before a simply astounding performance of 'Venus in Fur', had shocked us with delight and we were determined to discover this an aberration or set pattern. 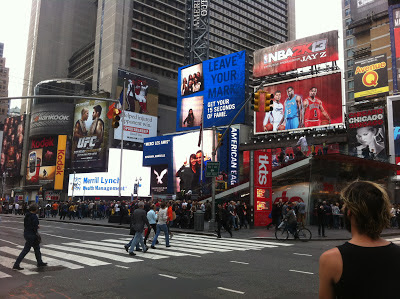 So with our sudden call by Scotland Yard to study and advise on the Security Detail at MOMA, what with their showing of Edvard Munch's 'The Scream' for the first time in New York, we had a bit of time on our hands and prepared to mix with the tourists and enterprising NY'ers alike at the TKTS line. (This gem of an attraction is one of the best things about the theater in NY...and a must for anyone attempting to get a true New York experience.) 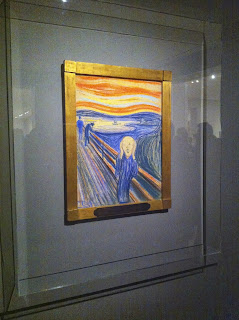 However, with the ticket window not scheduled to open until 3 PM this fine afternoon, we sidled into 'Trattoria Tre Colori' (and just one half block from Times Square no less!) at 12:30 on a Friday afternoon for a hopefully effortless and yet sustaining meal. 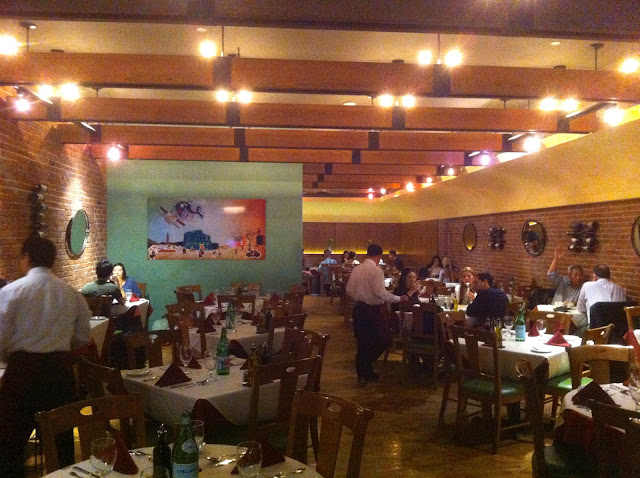 Quickly seated I noted there were perhaps 20 or so patrons inside…… an intriguing development which seemed a tad peculiar at what would normally be considered a robust lunch trade hour. Yet it was a clue from the Cabbie on our way over from Paddington Station (er, Penn Station) about it being a type of holiday in this fine city.....what type of holiday was not offered but one which may have explained this ripple in scheduling normality.

A basket of bread delivered, two types - both crusty and soft, was served with butter tabs and a knife along with a colorful assortment of olives in a dish with oil and garlic which was procured from a large cistern near the bar (and a festive jar at that, approximately the size of a large pumpkin.)

With drink and lunch entree's decided among us, Watson chose a rich and robust Malbec ($10) while my melancholy for an old favorite brought to mind a Pimm's Cup #1 ($10).

Remembering my old friend James Pimm from Kent who came up with this wonderful gin-derived and herb distilled elixir while at his oyster bar near the Bank of England, this short and squat refresher was an amalgam here of Pimm's #1, Limonata, mint, and cucumber…..and while not served here in it's original and customary tankard as it is back in London, it was a splendid and vitalizing mid-afternoon digestif nevertheless.

Entrees of Cappelini Puttanesca ($16), a fine pasta of Angel Hair mixed with tomato, garlic, anchovy, capers, and Gaeta Olives as well as the day's special: Ravioli Giorno - a Lobster Ravioli with Jumbo Shrimp in a creme sauce ($22.50), both arrived very quickly to sate our famished dispositions. The Cappelini was tasty and tart with an airy lightness that was delicious if not subtly twinged by the Gaeta Olives (which both Watson and I found numerous on the plate after the meal...a small but telling sign.)


The Ravioli Giorno, the day's special, came with only 5 fairly large Ravioli but it was what they did WITH these that stirred the soul and was made evident upon the first bite...... Oh! Deliciousness Incarnate!! A melange of flavor enveloping the palate……… I was quite taken with the creamy goodness and the taste of fresh lobster, however limiting they felt in this group of five, that I nearly swooned and surely would have denied it had it happened, blame it on jet lag I always say!

Pimm's cup depleted, a Brooklyn Brewery Six Point Amber Ale ($7) was proffered and used to help wash down the Lobster Ravioli wonderfully while Watson ordered a decaf coffee and we left soon after completely satisfied and ready for our stint in Times Square and its half priced Broadway tickets for that evenings performance.

(And as an interesting aside - we attended a show that evening of 'Peter and the Star Catcher', winner of 5 Tony Awards with a surprising take on the pre-Peter Pan story told with melodrama and humor. However, just AS surprising was seeing both Bill and Melinda Gates, they of stupendous Microsoft fame (and fortune), simply standing next to Watson and I at shows intermission...... just a couple of regular blokes out for an evenings show.

As Watson and I are not inclined to be particularly taken with celebrity OR with the wealth of others, I was thusly impressed by the restraint exercised by all in the theater, both tourist and resident NY'er alike. Space and privacy was afforded freely with nary more than a nod and a handshake.

Afterwards, in the process of capturing the attached pic of the Brooks Atkinson Theater placed above, the world's richest couple remarkably appeared again before us, and with just a walk across the street towards us they quickly just blended back into the sidewalk crowd of New Yorks theatergoers. Not a blacksuited guard nor livery driver in sight. It would have been such an easy picture to take but as is our preference, the lens was dropped as they passed further allowing them their normalcy and as they approached I offered not so much as a visual acknowledgement of their presence.

However, once removed I made a mental note to discover the head of their security detail for SURELY they were either completely inept or surreptitiously successful beyond all for their presence was impossible to detect!!