Putting our last caper behind us, Watson and I felt perhaps it was a good time to enjoy a hearty burgundy and some well tended Greek food and with Tarpon Springs, FL boasting the largest percentage of Greeks in these United States, it was high time that we focused our powers of observation and keen analytical skills on the famous Sponge Docks here, an intriguing area northwest of Tampa simply teeming with Greek restaurants and shoppes.

Part tourist haven and part Greek pantheon, this dockside destination cannot help but drip Greek authenticity what with so many great eating establishments:  Mykonos, Hella's, Mama's, Costa's, Plaka, Yianni's...a cacophony of Spartan enclaves - and still there were more and with most on the same main strip of Dodecanese Blvd. And while some of these places simply drip heavy Greek kitsch and give one the strong impression of being on a restaurant movie set rather than an authentic Greek Restaurant, there is no doubt in this investigators mind that each offers their own versions of true Greek cuisine. 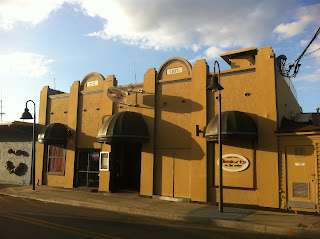 Investigating the entire lot of restaurants seemed to be in order but with a need to start somewhere, a tip from a trusted local led us to 'Dimitri's on the Water' for our first excursion.

Let us see what this true Greek mecca could serve up.

An early Saturday afternoon hunger brought us into Dimitri's around 5:30 PM and we were quickly seated right on the outside dock area next to the water.
The outside of this restaurant, with it's heavy block mustard brown facade, gave us no indication what awaited us inside. Yet upon entering I noticed immediately the melange of Greek life all about us. Not the trappings of commerce mind you but actual Greek life; full Greek families, couples, parties, kids..... all very much Greek (this was a known given the Greek language being spoken so heavily and the festive Greek aura at each table). All thoroughly enjoying themselves, some dancing to the lone musician singing Greek melodies on his guitar near the bar, others merely clapping and singing at dinner parties throughout.... and with nary an 'OPA' to be heard!

The other clue that we were on to a veritable Greek experience was the visible lack of 'tourists' to this emporium. While seemingly not  a clue worth noting to most but take note I did for with very few tourists in a predominantly tourist-y area, and with visibly tourist-minded Europeans meandering in their lobster-burnt skin up and down Dodecanese Blvd., here Dimitri's was filled with locals...... those who know where to go and where to enjoy their true gastronomic heritage - THIS was going to surely be the test of fine Greek food as our past experiences have pointed us towards a positive final result most when locales are laden with a heavy local customer base thereby ensuring it's success.

And this was just such a place. Hmmmmm... intriguing to say the least.

Seated, we were approached quickly with water and laminated menus (the stuff of legend for sure), our stomach's were already beginning their own separate dialogue ... and most loudly I might add.

Upon first perusal the menu entries seemed almost rudimentary, one might say pedestrian even, with category headings titled 'From the Boat' or 'From the Farm' along with Appetizers and 'Burgers, Sandwiches, and Wraps'; in my view this did not bode well. It wasn't until I focused more closely on the handwritten listings underneath each heading - these were in fact TRULY Greek specialties we were being offered.

Watson and I ordered an appetizer of Melitizanosalata, which might also have been a flying dinosauropod in prehistoric times for what I discerned but was actually a small yet spritely melange of eggplant, garlic, onions, parsley, and olive oil served with toasted pita wedges...Trusting only our instinct with these offerings we ventured courageously and gastronomically forward. And Great Scott was that a tasty dish! So tasty was it that like the smoke from my restful pipe, *Poof*, Watson and I had finished it off before one of us could even snap a picture! Yes, THAT was tasty!

Continuing to peruse the entree listings I felt as if I was being wrapped by stretching tentacles and pulled into the offerings themselves, suddenly overwhelmed and taken by anything and everything involving Octopus.... this cephalopod was listed more on this menu than on any I'd ever read and these very listings drew me to them like the Sirens called Ulysses. My acute hunger zeroed in on the 'Grilled Thalassina', an amalgam of Grilled Octopus, Calamari, Scallops, and Jumbo Shrimp..the Four Seaman of the Deep if you will. And as if that wasn't enough to satisfy my pangs I was given the further choice of two additional side items. So staying outside the Kings Square (or the Queen's 9 dots you might posit) I elected the Rosemary Chickpeas and the Briam, or braised vegetables, which I ordered simply because I had no earthly idea what it was at all.


Watson was less venturesome and went out on a limb ordering a ........Greek Salad! (Oh COME now Watson! Stretch your culinary boundaries and live a little my boy!) But such entreaties fell on deaf ears as our waiter soon warned my good friend that the size of the Greek Salad ordered was certainly reason for pause. And at a whole whopping (a'hem, cough, cough)  $14.00(!) I seriously doubted it COULD be very large. Additionally, with Watson's portly disposition I doubted that Dimitri's could deliver on such any such warning that the Dr. could not handle easily.


Yet when our meals arrived I sat flummoxed as the succulent morsels of chargrilled sea denizens were nearly too much for even myself! I dove in immediately!

However, it was Watson's Greek Salad that drew my uncomprehending and discerning eye. It was simply MOUNTAINOUS, large would not be the correct term...more like the size of a Royal Pheasant or what you American's sometimes call a Butterball turkey! It was so stupendous that afterward it took TWO large to-go boxes to cart out the remains....and yes their WERE remains although Watson DID put a King James sized dent in his plate!

As stupendous as that was however, the deliciousness of the Grilled Thalassina is certainly not to be underemphasized. Served on a very large dinner plate yet swimming in a hot broth of lemon, olive oil, and spices, the shrimp and calamari were teeming, the scallops spare yet superbly succulent, and the octopus was without question the most delicious I have ever had in all my years of study...grilled or otherwise. So mouth-watering and delicious was it that the tentatcles of it's taste is still reaching into my mind over a week later.

By the time we were wrapping up our meal the early evening sun was setting on the serene Anclote River and it cast the entire area in a warm October glow......perfect for an after dinner stroll along the curio shoppes nearby.

Our stomach portly, and our hunger sated, we exited with smiles on our faces and a determination to take this Greek city one restaurant at a time but we both agreed that Dimitri's was an excellent First Choice! 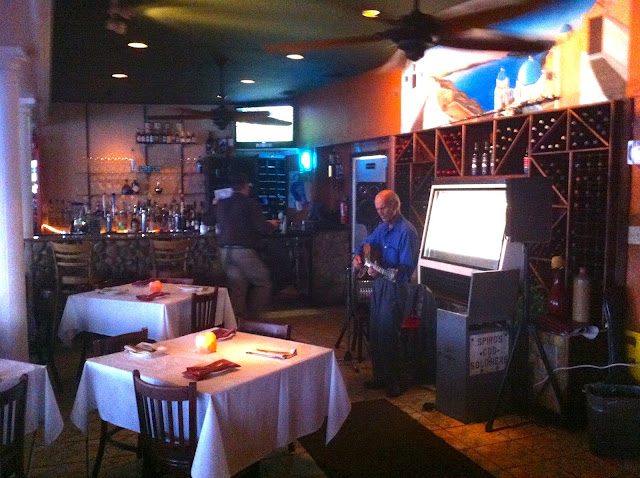 Posted by SherlockHolmesReviews at 11:09 PM