Euclid Hall - Mathematics Was Never So Much Fun! 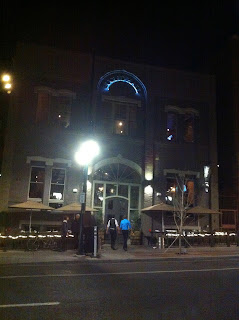 Visiting Denver to assist The Baroness Rachael with her move into her new castle, Watson and I were joined by the Viscount Palmi of Iceland and Lady Sierra who had also just recently begun occupation of their new Broomfield Castle after a brief campaign in the Evergreen foothills this summer.

With so much to discuss and catch up on with the Baroness and the Viscount, we met at a GastroPub near the LoDo area of Denver intriguingly called Euclid Hall, apparently named for the Greek mathematician Euclid, the Father of Geometry; by definition that branch of mathematics concerned with the properties and relations of Points, Lines, Surfaces, Solids, and Higher Dimensional Analogs (this per my good friend, the Honorable Noah Webster).

Now what struck me about the name of this converted Saloon House was how it perfectly yet tangentially describes the gastronomic endeavor we embarked on with it's perfect intersection of food textures and surfaces, solids expertly choreographed with liquids and semi-liquids, along with an over-the-top selection of alcohols and other liquid accompaniments. This Nom de Guerre juxtaposition was too delicious to not take note of! 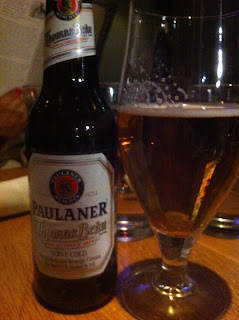 Awaiting the arrival of our guests, Watson and I decided to sample a taste of a select brew or two, with Watson selecting the Great Divide Hades Belgian Golden Ale (7.8%) while I chose a snifter of Boulevard Tank 7 Farmhouse Ale (8%), two choices from eleven draughts available - none of which come from Milwaukee or St. Louis. And while our choices were made from a list that included Steamworks Colorado Kolsch, Avery White Rascal, Deschutes Black Butte Porter and Oskar Blues G; Imperial Knight Red Amber, it was the care and consideration given to the Cans and Bottles selections listed next. 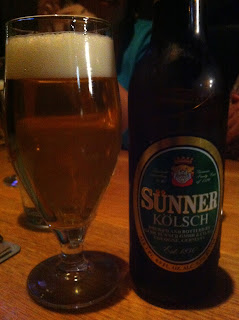 With a definitive nod towards Mr. Euclid, and with the care that this true Gastropub exhibits towards their very lucky patrons, the selections were categorized further into mathematical brewmaster groups such as Arithmetic [Session beers, Easy drinking, Low Alcohol - 7 brews], and Algebra [Still approachable, more flavor, more complexity-6 choices including The Old Speckled Hen], and on to Geometry [6], Trigonometry [6], Calculus [5], and Quantum Mechanics [Biggest, Strongest, Most Complex - 6 choices]

It was evident from this dissection of available bromides that the purveyors were especially concerned for the satisfaction of their guests while also taking pains to properly acquaint their beer drinking brethren into appropriately comfortable avenues of quaffing.  And if on the off-chance that NONE of those options tickled one's fancy, the choice could be made from the 'Library List' of special selections available 'on a limited basis' including Firestone Walker Wookey Jack Black Rye IPA (!), Unibroue Cali-Belgique Belgian IPA, and Brewdog Dogma Scotch Ale, as well as 9 additional qualified candidates.

But still not satisfied, there are Euclid Hall Beer Cocktails as well! (such as The Kansas City Cup - Made from Boulevard Tank 7, Brokers Gin, Pimms, Lavender Simple Syrup, and Lemon Juice) Specialty Drinks (for example, the Moscow Mule - Sobieski Vodka, Lime Juice, and Ginger Beer); or one of my favorite named concoctions: The Dickel and Pickle (A shot of George Dickel Whiskey with pickle juice back! Outstanding!!)

And they STILL moved on to wines, bubbly, reds, and others so they ensured that no one would leave unhappy!

What many inveterate pubbers do not realize is that the ubiquitous 'Pub' in Britain is the location where the 'PUB-lic' went to eat; Royalty, Earl's, Count's, Landowners, and such having banquet halls, sumptuous homes and other private dining opportunities....the Public, when they wished to 'dine out' usually found themselves in feeding halls and bars that served food....... thus the manner that PUB's came to be named. And the food found in PUB's was generally over-cooked, over-stewed, over-steamed, and quite often over-baked offerings like Bangers and Mash (blah), Fish and Chips (Blech), and Shepards Pie (a mix of all things that didn't sell the day before). The GASTRO-PUB is the moderately recent attempt by exuberant restauranteurs to enliven the GASTRO-nomic experience with PUB-fare fit for Royalty! Swirl in the sudden popularity of Micro-Brews in these United States and the GASTRO-PUB Concept was born. [One of the more infamous GastroPub's in the US, which Watson and I have had the pleasure of visiting, is The Spotted Pig in NYC where our friend April Bloomfield has genuinely re-defined the genre.]

Here in Denver I can tell you that Euclid Hall deserves a step on the ladder towards such platitude.

Our appetizer choices were grouped into three tongue-in-cheek category headings starting with 'Because We Have to'.... with entries such as a Simple Salad, a Chopped Salad, a Cauliflower Salad as well as the ubiquitous Fried Cheddar Curds with Buffalo Ranch Dip ($6), this chosen as an aquiescence to the Viscount and his affinity towards fried cheese morsels. Then, the 'Because We Want To' class entailed slightly more adventurous choices including the (I'm-sure-it-sounds-appetizing-to-someone) Fries with Eyes - Fried Great Lakes Smelt with Tarragon and Aioli, along with it's sister selection the 'Daily Artisinal Cheese Board' (with beer pairing also offered).

However it was the final class, aptly titled 'Because We Can' with selections that both startled us AND showed the heights of their chef's adventure. Inclusions were Pad Thai Pigs Ears, Bruleed Center Cut Beef Marrow Bones, and the choice we made, the highly recommended these 'Chips and Dip', but make no mistake….this is unlike any 'Chips and Dips' we had  EVER experienced.

The Chips and Dip ....well, what arrived at our table was a staggeringly unique amalgam of ingredients on an ice cold plate starting with a Lemonized Goat Cheese base layer piled high with Kennebec Potato Chips and Duck Confit in a large mound and all topped by shaved slivers of cold pressed Oolong Tea Infused Rare Duck Breast (shaved, cold) and with  baby dill ($11.50) My wager is that you could put these ingredients in a room with one hundred qualified chef's and not come up with this delicious offering.... an introduction to Euclid Hall unlike any first plate I've ever witnessed!
And on it went from there...........entrees included 'Chicken and Waffles' - Crispy Chicken Mousseline and confit nuggets, sourdough waffle, black pepper bechamel and a maple gastrique ($14.50) which the Baroness wasn't particularly fond of as it was not what she was expecting yet agreed that it was done extremely well!


My own inclinations ran towards the 'adventurous' and everything so far WAS adventurous so in came the Manila Clam and Merguez Caldo Verde, a slightly stewy soupy mixture of clams and spicy French sausage with braised kale, fried garlic, grape tomatoes, olive oil crositini, smoked malt and rye brodo, a Top Hat type stand of crusty rye that was perfectly included to soak up the saucy, spicy broth remaining after I had scarfed down the morsels served ($13). This was ordered simply because it sounded so good but also as I had no idea what to expect from it.....overwhelmingly the sheer uniqueness of the menu was something to be marveled at.

The Viscount and Lady Sierra were in burger mode and so ordered the Brat Burger - again, expecting one thing and having delivered something altogether different. A 'burger' made of bratwurst served on a pretzel  bun (Bretzel!) with pickled cabbage and 10,000 Island Dressing and Jarlsberg Cheese ($9.50). With one bite the Viscount looked like he had both been completely fooled AND overjoyed at the same time.....opining 'This was NOT what I expected it to be but it IS the BEST BURGER I have ever tasted!' High praise indeed!

Finally, desert brought us the baffling 'S'Mores Pot de Creme' - house made graham crackers and marshmallows ($7) and the Smoked Chocolate Stuffed Strudel with Malted Ice Cream, Stout Toffee Caramel, and Hazlenut brittle ($6). ALL participants were struck by the goodness and whirlwind nature of every item on this menu.....and yet we barely scratched the surface!

MANY more visits are in order! Watson, come quick! And bring your protractor! There's GEOMETRY to solve!!

Posted by SherlockHolmesReviews at 12:20 AM