Lester's Diner - The Definition of the 'Greasy Spoon' 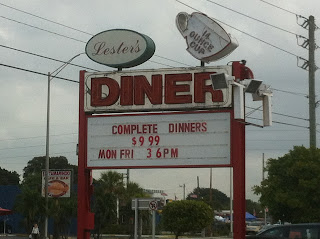 On a case investigating possible armament smuggling in and around a major defense installation in South Florida called Fort Lauderdale, (apparently a Dept. of Defense base masquerading as a tourist destination), I was led to a little dive of a food emporium called 'Lester's Diner' on SR 84 that elicits the absolute definition of the 'Greasy Spoon', that endeavor that proffers all manner of sustenance in a quick and no-nonsense fashion yet in this case without all the unsavory underpinnings.

To be fair there is nothing particularly special about Lester's other than the very expedient service I received, the vast variety of choices I was offered this particular morning, and the downright pauper friendly bite such a visit takes from my coin sack. 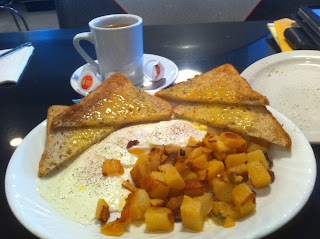 Yet in varying degrees we must also pay heed to what the 'levels' of satisfaction exist in the marketplace and while one might swoon over a well aged sturgeon egg or a heady roquefort cheese, no one 'expects' such headiness when entering Lester's.

The expectations of a good Diner, which Lester's most definitely is, includes fast, cheap, hot (or cold) food, served with a smile and an endless cup of coffee. With three eggs over easy, rye toast and potato's, I could overlook the 'greasy' oleo butter like spread on my toast for that is ALMOST EXPECTED in a truckstop favorite such as this.

Patrons in the back dining room (was it hotter than normal there or was it the 9 cups of coffee I consumed while there?) included a group of truckers. 4 Coppers (with sidearms showing), Six (6) businessmen, and a family of 5 who spoke what I detected was a pronounced Eastern European Accent........

Who this Lester fellow is I have no idea but this greasy spoon is a sidestep that satisfies those in need of good grub and frankly, one that I see myself visiting again!
Posted by SherlockHolmesReviews at 10:36 PM