The Case of the Missing Calories - Seasons 52 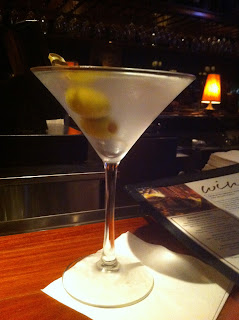 Very seldom is there that a case comes forth that intersects both the joy of the culinary with the delight of the company present, yet this is just what occurred at a recent clandestine rendezvous I had in the Boca Raton area at Seasons 52.

As luck, pluck, and diligence was no doubt on my side that day I extended an invitation to a long cherished confident of my work, a delightful woman whose lineage extends to the deepest of Swedish Royal families..... and for reasons of State secrecy she will be known only as Lady C for to reveal her true identity might not only jeopardize future such meetings with such a delightful creature but also consign me to a forlorn corner of the investigative world, a location no one in my profession wishes to find themselves...ever!

Our chosen location to meet was Season's 52 on Glades Road in Boca Raton. As the date of this meeting was approximately 2 weeks prior to the Christmas Season, the Valet area was nearly on fire and the available spots to park as difficult to find as a black pearl in a beligerent oyster!

As is my wont, I arrived early to secure the area from any nefarious types as well as to engage in my customary Bombay Sapphire Martini, up, with three olives (blue cheese olives being passed over in the interests of anticoagulation).

My investigative antenna went up almost immediately as serenading the festive holiday diners was a 'Bo the Bounty Hunter' look-alike whose croons belied an inner Van Morrison-Cole Porter.  This scene was nearly an entrance into bizarro world but with my back to the visuals I soon lost connectivity to face and voice and reveled in the aural accompaniment....and Welcome it was for medley's of Boz Scaggs, Steely Dan, Van Morrison, and a few other choice morsels salved my fears and (along with Lord Bombay) I began to feel quite jovial.

Upon the entrance of Lady C, as vivacious and vibrant a creature as has ever walked the Earth, we were quickly seated and our reacquaintance began in earnest.

Pleasantries aside, hunger drew us just as quickly to the menu here at Seasons 52 which, as the name implies, circles the finest ingredients available in whichever 'Season' one happens to find themselves. Festive Salads in Summer and Deep Golden Roasted Root Vegetables in winter, with all other seasons well represented.....and ALL with an eye towards the healthy and fit for no menu item is said to contain more than 475 Calories! INDEED! This a feat that seems nearly impossible while ALSO attempting to leave your diners satisfied. THIS would surely test my skills of investigation! Come quickly Lady C, the game's afoot! 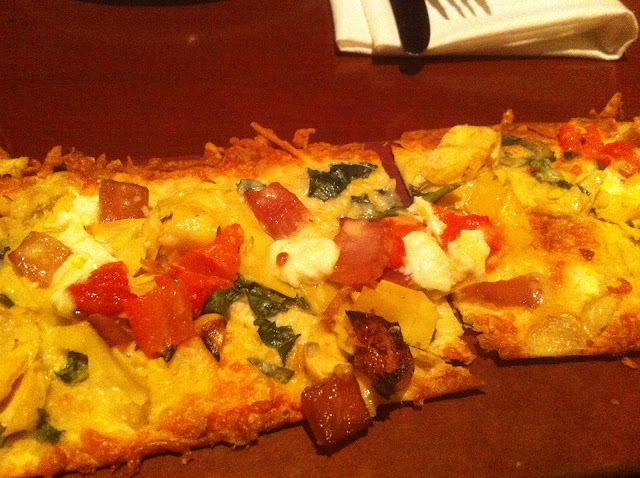 Among a healthy selection of Flatbreads offered we chose an Artichoke, Leaf Spinach, Balsamic Onions, and Roasted Peppers selection with Goat Cheese and were soon regaling in it's deliciousness...yet it was also beguiling as my trained eye immediately questioned it's 475 calorie ceiling....and yet eat away we did!

With further 'Specials' rotating in and out of this all star menu '52' weeks a year, our entree choices were the BBQ Chicken Salad for m'lady and the Grilled Boneless Rainbow Trout for myself. Lady C surprised me with her choice but I deferred to her knowledge as she had previous experience in these environs and who am I to question any choice as my own predilections led me to a Rainbow Trout dish as surely as a Marlin is drawn to a baitfish. 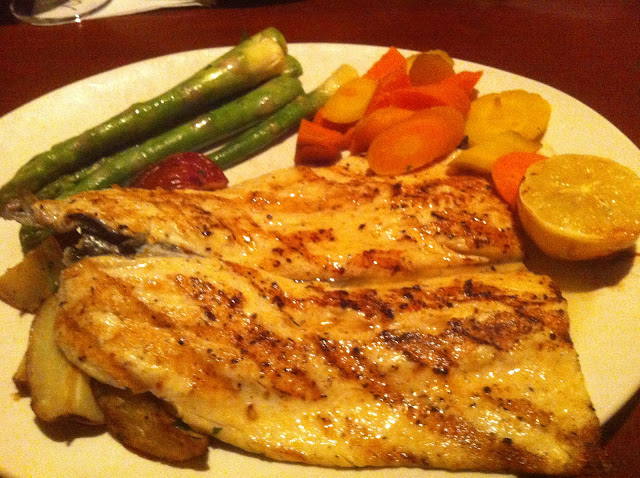 BOTH meals were as succulent, as well presented, and as aromatic as they were billed to be and as we continued on into the evening the conversation and the gastronomie were both swirling and intertwined and soon became indistinguishable from each other....and knowing that the personal communication was of the highest levels, I was thus also impressed that the offerings of this fine establishment were an equal match! 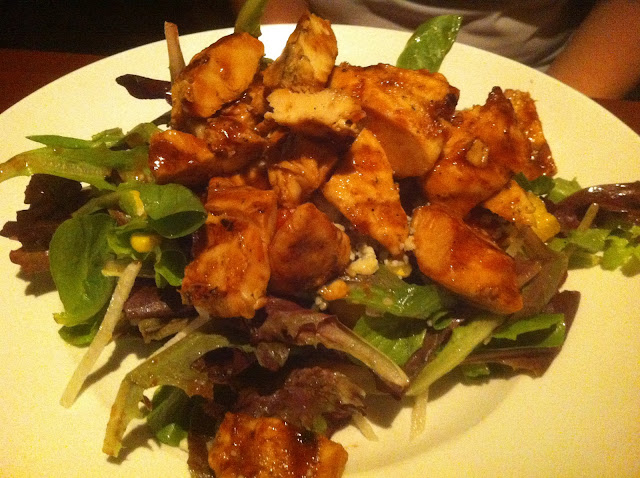 And with the advent of dessert upon us I thought for SURE this is where I could trip up the chef extraordinaire, for NO ONE could deliver any type of desert worthy of the meals we had just completed AND remain below the 475 calorie threshold......but upon first sight of the 'desert tray' I knew I had met my match. Arrayed in rows like Santa's Reindeer pulling a sleigh were the evenings offerings....in tall shot glasses and decorated in all their splendor as if they were ten stories tall!

BRILLIANT! The desserts had the attractiveness of fine jewels and yet the lack of their abundance bore no weight whatsoever to their reception, they were simply unparalleled! And in hindsight, what BETTER way to leave your patrons than with the accomplished feeling of 'taking it easy' on the dessert side! Everyone leaves satiated, delighted, AND firmly confident that THIS was a place they could come back to again! And so they DO! 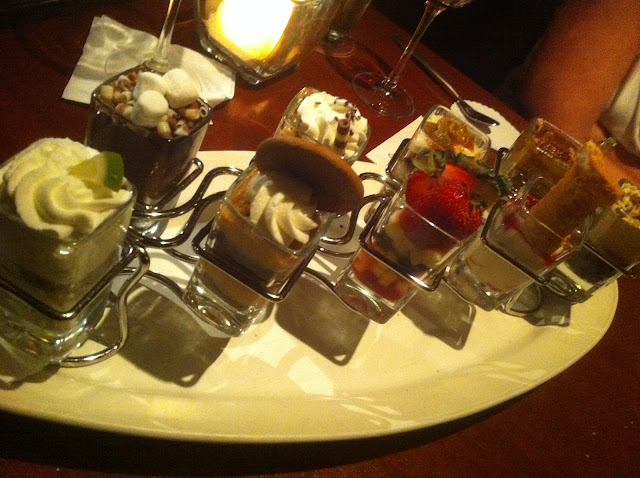 Posted by SherlockHolmesReviews at 4:42 PM