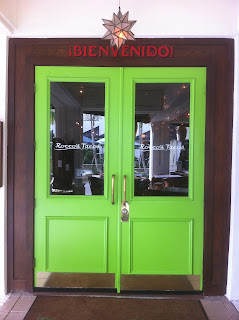 With many of my investigations taking place in some very specific areas of this fine country (New York City, Colorado, Florida, Texas) one comes to know by the counting of the digits on one's hand the places that can be relied upon to provide a no-surprise, thoroughly enjoyable experience every single visit and Rocco's Taco's of Boca Raton (and presumably the other four Florida locations) is easily one of them.

This Boca locale, neatly tucked away in the 'Restaurant Valley' of the Boca Town Center on S. Military Trail, underwent a name and format change a while ago from it's equally well presented 'City Grille', which was also a healthy check in the 'yes' column for its comfort and delicious reliability. 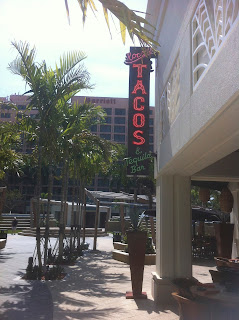 However, whence renovated and reintroduced as 'Rocco's Taco's', one was wont to ask (this one specifically!) 'Why'? What reason might there be I pondered for tinkering with a format that was seemingly performing so well and had been wonderfully received?? Well, the answer was now evident for one only needs to NOW experience the enthusiastic vitality of this new environ to see that there is a rejuvenated vigor in this delectable enterprise...and with a noticeably marked turn towards the 'young and vibrant' in the patrons now enjoying said vigor.....or just those who want to 'feel' younger! (Everyone seems 'younger' to this inspector these days! How old IS this 'Rocco' I'd like to know!)

Placing face down on our lunch table the 200+ Tequila offerings so as not to entice my 'guests', we elected to sit at one of their splendid outside tables this being a fine spring day without the clawing humidity that Florida so graciously offers. And it was in this quiet outside that I noticed the makings of a possible future fine evening affair, a desolate Rocco's Taco's outside Bar, no doubt soon replete with the Enejo (aged), Reposada (rested), Plata (silver) and Oro (gold) Tequila's I was now savoring..... and positioning my svelte EnergelNV Fine Point, Black, a note was made in my journal to return to this geo-synchronous location and 'further investigate' these fine Tequila's when 'my wits' were not so needed to be about me!

Joining me on this particular investigation was Baron Von Russo, Lord of the Queens Land, and his Special Envoy Natasha La Plume, recently of the Georgian Empire. Additionally, an invitation was extended to Her Excellency Lady Hannah of Medina who had a particularly long-honed expertise that I felt would be called upon in this day's caper.


Thusly perusing the extensive menu of 'Mexican Specialties', each with a marked twist from the ordinary, Lord Russo, he so graciously accepting the lunch invite on behalf of himself and his Special Envoy.....chivalrously allowed her to order first and with aplomb and poise ventured forth - the 'Enchiladas Verde Chicken', with it's pulled chicken breast and tomatillo sauce.... a splendid selection! Now here was a true woman of adventure venturing forth without so much as a glancing skew....

Then Lady Hannah, with focus unparalleled and without a seconds' hesitation, chose the Durango Combinacione...with it's offerings including a BBQ Beef Tostada, Skirt Steak Taco, and a Quesadilla Con Queso.......interesting! Even the combinaciones offered had a special twist to them for this was no ordinary 'combo plate'!

Yet it was Lord Russo who decided to truly test the Mexican integrity of this impressive menu and with the certainty and fortitude that he carried about him daily, which was found to be impressive by all he encountered daily, looked at our waiter cheerily and ordered  ..............a Cobb Salad. A Cobb Salad! (Why my good man, are you devoid of reason? Would you order a Big Mac whilst at a Dim Sum shop in Chinatown? A grilled cheese sandwich without crusts at Bar Masa in NYC (not that they would even let you!) Might you also be having the Vanilla Ice Cream and Chocolate Milk for dessert?)

These were the comments I could hear myself saying out loud yet, master of restraint that I've trained myself to be thru similarly unbridled occasions, I so very quietly.....leaned in and ......inquired very gingerly and discreetly of The Baron....."A COBB SALAD! My Dear LORD!! Are you serious? At Rocco's Taco's? With it's 200+ tequila's (no, I was not obsessed) you ordered a .........."

"Uh, Mr. Holmes, it's a Mexican Cobb Salad sir, it says so right here.....see?" No, I had NOT seen and quickly grasping my magnifying glass I decided it might be wise to peruse this menu for myself in much finer detail!

Sure enough, Rocco's had added a Tijuana twist to this Brown Derby specialty, that amalgam of leftovers from the ice cooler deftly made into a rainbow of tasty color, it's incorporation of Mexican grilled chicken, pico de gallo, grilled fresh corn kernals, guacamole, egg, cojito cheese, and a chipotle-lime vinaigrette thus transforming a mere Cobb Salad into a delightful plate of Monterrey beauty. Superb! [And for those who desire to know what the original ingredients of the creation named in 1929 for Sir R. Howard Cobb, one must simply 'EAT COBB'....Egg, Avocado, Tomato, Chicken, Olives, Bacon, and Blue Cheese! Elementary really..........) 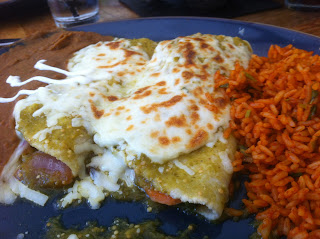 Now faced with the choice I ponder at every meal while traveling under my alias identity: do I stay true to my vegetarian leanings or give in to the constant temptations of the flesh, allowing myself to be drawn deeper and deeper into it's intoxicating swirl?  Sorting thru all manner of pescados, tortas, mocajetes, and antojitos, with a slight twitch at the 'tres amigos' of chips with three different fresh salsa offerings, I had almost given up hope when I spied the 'Vegetarian Enchilada' entry there on the menu! Oh heavenly salvation, I was rescued at just the right moment! Trying ever so valiantly to stay on course with a plant-centric diet is certainly not easy what with flaming Mexican fajita plates and Carne Asada platters traversing the air space around you! 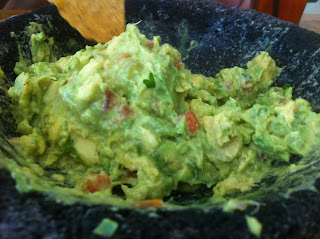 No sooner had we placed our orders, and elected to also partake in the house specialty of fresh table-side made guacamole, when we heard a CRASH behind us! Suddenly strewn about us was what looked to be roughly 1000 avocado's (well, surely 30 at least!) as the Guacamole Cart used to traverse the restaurant and make tableside this delicious accompaniment, lost it's healthy load in a very audible fashion!

Looking about at the nearby diners I sensed a worrisome appearance upon many faces, many of whom surely felt that THIS was not the preferred manner in which to make guacamole, was it??Mashing avocado's by throwing them to the ground? I so soothed our guests in pointing out that with their healthy protective skins none of the fruit were any worse for the wear and might actually now be considered 'pre-mashed'....only our Guacamole Gourmand seemed to be suffering the worse fate of deep, red chile faced embarrassment!

With meals delivered and the tone and volume of conversation at a newly subdued level (occupying the vocal chord area with food is always a surefire way of decreasing the cacophany at any event) I excused myself to take in the wider suroundings and afford myself the use of the facilities.

Now kudos and kippersnacks to the chap who originally determined that the area above the men's loo might be a keen location for an ad-vertisement or other such proclamations. It started off oh so innocently enough decades ago.....a handbill here, a chalk board there, then gravitating to the newspaper posting, sporting events mostly - the latest on the rugby match or the results of a cricket tournament to preoccupy the 'reader' (I cannot say what might be placed in the ladies powder room except perhaps... powder!)

Accompanying the expansion such promotions over the past decades came the cascading prices of electronic technology, with many 'forward thinking' establishments opting to thus put mini-screen displays in place of news pages for their gentle yet dyspeptic patrons to be calmly assuaged. 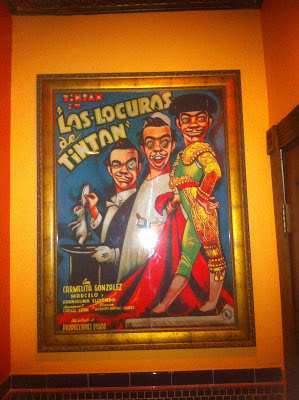 Rocco's, with it's choice menu item of freshly made tortilla chips served with three distinct salsas, takes this trend one step better for over the catch basins these color screens run continuous loops of their delicious menu item - 'The Three Amigos!', that favorite of comedic cinema with a decidely pseudo Mexican flair! Oh the deliciousness of this was already too much to absorb when I noticed a small boy standing with his father asking 'What movie is that Dad?", and listening to his father try to explain why this was playing in the men's urinal was almost more mirthful than the movie! Further adding to the tongue-in-cheek spirit throughout was a large number of humorous period piece posters running the gamut from Mexican Wrestlers to faux movie-house colorations. An Excellent Touch!

Returning to our outside seating, I noticed many tables now replete with large umbrellas or some sort of shaded protection, for in the South Florida sun many non-Floridians mistakenly believe they are visiting the surface of Venus rather than a tropical residential and commercial paradise.

The result of this visit only confirmed that Rocco's Taco's is much, nuch more than it's name implies and is a requisite stop for excellent food and spirits while in this vicinity.

So with another case drawing to a close, it is no wonder that later that evening I found it quite necessary to personally inspect the claim of 200+ varieties of Tequila on the very premises! And while I cannot vouch for the veracity of such a claim (in print!), I can tell you there are at least six that I have become personally quite acquainted with and fond of.

The remainder? THAT will have to be left for another adventure!

Posted by SherlockHolmesReviews at 12:39 PM