Bell Street Burritos - In Atlanta's Old Fourth Ward - The delicate balance of the exemplary and the routine wrapped in deliciousness! 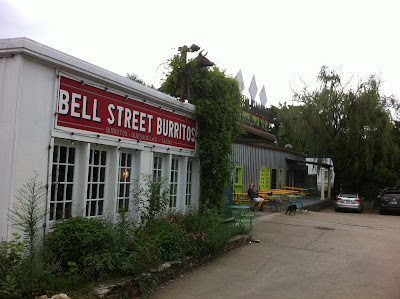 With Prince Michael and Lady Elizabeth now taking up residence in the  Candler Park neighborhood just east of Atlanta, Watson and I took the opportunity to stop up and continue our gourmet galavanting and discover the exciting food establishments this fine city has to offer.

And with visits already made this particular weekend to exemplary yet altogether visceral ventures including Leon's Full Service, The Iberian Pig, The Highland Bakery, and Sweetwater Brewery (reviews for which to follow post haste!) we elected to not further flutter the dovecoats and chose to go a bit lowbrow. So with the Crown Prince and his newly betrothed Lady Elizabeth in tow, we sought out an easy first entry: Bell Street Burritos.

This new Bell Street Burritos, which my investigation turned up as not being ON Bell St. but on IRWIN St. in the Irwin Street Market near the East Beltline, came VERY highly recommended and even found it's way onto the Dec. 2012 USA Today list of Best Burrito's in America. 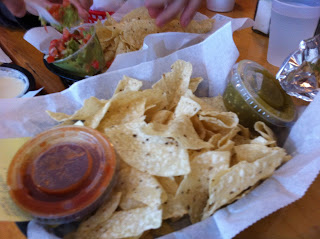 Not the easiest place to find, the location and the size of this hot-spot are curious as they do not immediately give a patron much in the way of a very warm welcome nor does it instill one with a sense of impending comfort other than the inviting white facade and large lettered sign. The structure speaks 'Auto Yard' rather than 'Taqueria'. Parking is difficult and building remedies were in their obvious midst but the wisened overlook all this for upon arrival the line of eager and hungry patrons awaiting their turn at the counter to place their order was already 12 deep......and this at 4:30 PM on a Saturday..........comfort apparently be damned!

It's a simple enough menu, although written in a less than immediately grasped font-something that might be causing some of the lines' length I would say, with Burritos, Quesadilla's, Tacos, and Salads all offered in four Vegetarian and four Non-Vegetarian sorts: Bean, Green Chile, Potato, and Broccoli for the green team and Chicken, Pork, Steak, and Shrimp for the red team....with an additional assortment of accessories for each: Salsa Fresca, Onions, Jack Cheese, Pinto Beans, Spinach, Jalapeno's, Rice, Guacamole, and on, and on, and....this makes for an a la carte bonanza for the insightful but somewhat of a nightmare for the uninformed, especially with hungry mouths on line breathing down one's neck. The addition of 'The Burrito Specials', tho difficult to 'pick up visually' on the menu at first, adds an easy A,B,C to the process....as well as the added bonus of a drink and a chips/salsa partner.

And despite the lack of beverages both fermented or brewed (Ah, my kingdom for a good Modelo, Pacifico, or Tecate my good man!) they did have at the ready Mexican Coke, made with sugar cane vs. corn syrup....which is quite the feat here in the land of Coca-Cola, and the Mexican Nehi - 'Jaritos', in flavors like Pineapple, Mandarin, Tamarind, Guava, Mango, etc..... Both additions an excellent albeit nuanced touch to the menu. 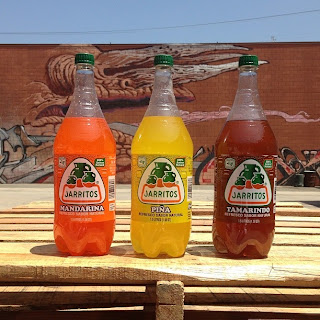 With orders placed the focus is then upon securing proper seating and the busier the time of day the more intriguing the search becomes. It is a very small venue, make no mistake, and without a proper food ordering/table searching plan (preferably discussed with one's party before entering) even the most cavalier attendees will be disappointed. It is always intriguing to me as to the calculus used to balance the available seating in an establishment, the outdoor parking given, and the menu pricing chosen for each is a leg to a stool that can either topple over with the use of a feather or withstand the weight of a great elephant if balanced properly. And on this early Saturday afternoon, with a jammed enclave and diners reluctantly leaving rather than wait on line to order AND then for a table once their order materializes from the back kitchen, I must immediately question the calculus in this case. I'd also posit that a fair number of re-visitors were already well-versed in this event and were seen picking up take-out or pre-ordered meals rather than deal with the cacophony that awaited them inside.


Only upon securing a table and securing one's beverage do you realize that almost before you are sitting down you hear a bellowing "#17"and are given your order faster than foxes drool in a henhouse, easily surprising even this most hardened visitor. It was only then that I surmised the brilliance of the enterprise: Fast in and Fast OUT! No alcohol to gather ditherers and the resulting quick turn will create a success to pine for! Elementary in it's simplicity for there is nothing more deceptive than an obvious fact!

Additionally, and as a wet-burrito man I am predisposed towards such encumbrances, the further easy and gratis availability of the fine salsas and sauces, Red-Mild, Green-Hotter, Chipotle-Hotter still......and the Salsa Fresca which is more along the lines of a chunky gazpacho, was both commending and delicious.

The Taco's and Burrito's that thus arrived: Pork and Green Chiles, Pinto Beans, Cheese, and Cilantro for Prince Michael and Lady Elizabeth, the Vegetarian Green Chile and Broccoli with Pinto Beans, Onions,  and Cilantro for Watson, and a Chicken and Green Chiles Burrito for myself, were so warmly welcomed that a further case has since been created for the loss of these foodstuffs into thin air had everyone baffled at it's rapidity and chagrined at their subsequent inherent fullness.

And SO full were the members of the party quickly made that we did NOT participate in such post meal festivities such as the Sopapillas, Hand-Dipped Milkshakes, or the Hand Dipped Floats.

What is still unknown is whether these were actually Bell Street creations or manifestations of Jake's Ice Cream which shares a common floor and entryway.

Assuredly something I noted to investigate further upon our NEXT visit!

And was it further beguiling still that upon our exit, the whole episode lasting no more than 30 minutes, that the steady flow of diners was still at an even flow...... a balance had obviously been reached and that calculus was no longer in question!

Posted by SherlockHolmesReviews at 5:16 PM