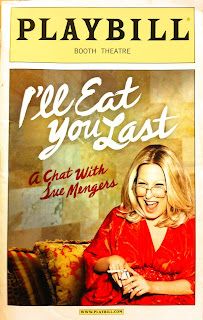 With an early introduction to the performing arts thru frequent visits to both The West End in London and to the famed Broadway Theaters on The Great White Way beginning decades ago, I've elected to now extend my keen powers of observation and perception to this great medium, 'The Theater', beginning with this chosen analysis. And certainly, while I acknowledge that this particular performance has since recently ended it's delicious run, I felt it to still be the perfect place to start......

In my extensive tally of investigations, if there is one thing I've learned in viewing over 100 various Broadway performances over the years it's that the charisma and magnetism required to captivate and then HOLD the attention of a Broadway audience is quite formidable (and is especially so today what with the advent of the ever impatient instant gratification entertainment crowd).
When one is gifted to witness a stellar play or musical performed by a smooth and polished ensemble cast, as had been the situation with the 'Wicked', it's important to note the shared responsibility of the performance and 'the whole is greater than the sum of it's parts' nature of these tightly knit performing units. Additionally, 'Wicked' is especially noteworthy in this regard for it has not only survived the departure of it's original stars (Idina Menzel, Kristin Chenoweth, Norbert Leo Butz, and Joel Grey), it is still celebrating 10+ years on at the Gershwin Theater on Broadway and is thriving on the national circuit as well. 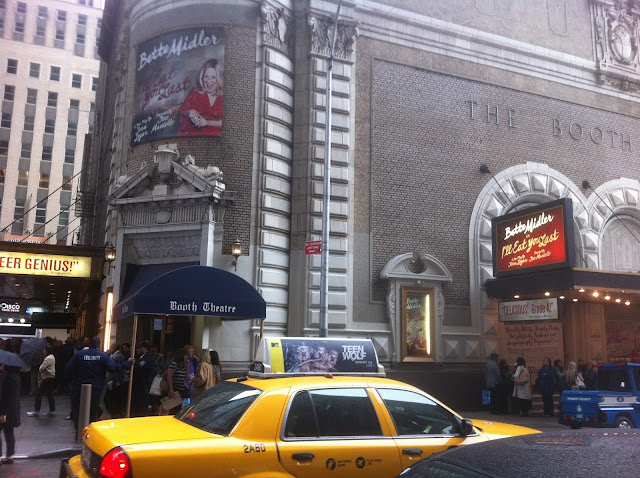 Even performances presenting prominent featured actors and actresses, such as with Mary Louise Parker in 'Proof', Bernadette Peter's in 'Annie Get Your Gun', or even Betty Buckley to a degree during her time in 'Cats', the stresses and pressures on any one performer is tempered and meted out among the entire ensemble. And yes, while some actors bear the burden more than others in such featured pieces, it's still a shared overall responsibility and thus a lessened stress level for all performers collectively.

Yet these tempered Broadway stresses pale in comparison to those that must be absorbed by the singular woman or man bearing the weight of the entire performance on their shoulders with no where to 'hide' and no one to give the lone actor or actress even a single moments breath or respite. (The exception being the astounding Nina Arianda in 'Venus in Fur' last season where a two person play was turned into an 'ensemble' unto itself with Miss Arianda running circles around her acting partner as well as all the other characters she played! THIS performance was a gift to behold!) 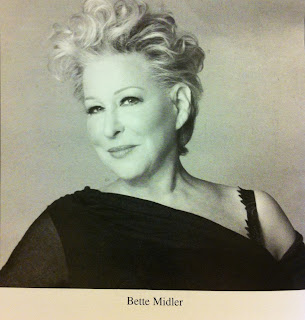 Bette Midler, in her recently closed limited engagement run as Hollywood Super-Agent Sue Mengers in 'I'll Eat You Last', indeed carried the required gravitas to captivate and hold her audience. Her star power was already as palpable as any and her bona fides were without question. That with such magnetism she invited in an hungry audience wishing to be enthralled in that aura was obvious; however what she then did with this shared gift once inside the Broadhurst Theater was what made this star driven performance a true 'Event'. 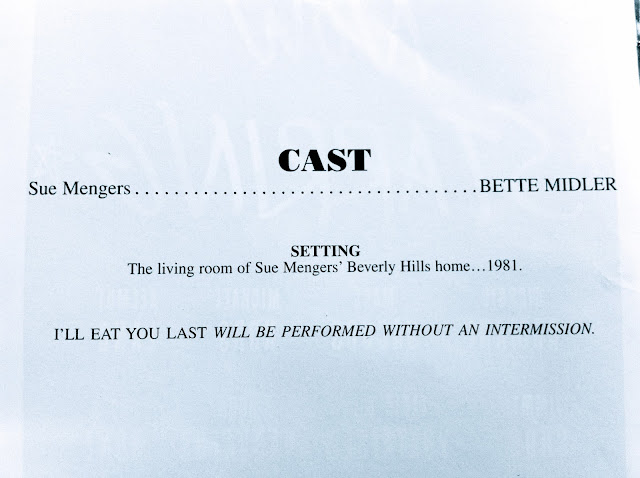 Performing eight shows a week for over two months in a ninety minute monologue,  without an intermission, while chain smoking throughout the entire performance, Ms. Midler had one hooked from the first brightening cigarette to the last long drawn out walk into seclusion and retirement.

Upon Miss Midler's entrance to the stage we were at once captivated by this star power. In these early parts of the show you were certain you were watching Midler playing herself rather than Miss Mengers, who was also Miss Midler's agent back in the day (the day being in the late '60's and early '70's) but thru deft writing and a finely nuanced performance, Midler took us back to the days of The Brown Derby and the Hollywood Hills....of Jack Nicholson and Faye Dunaway, Steve McQueen and Ali McGraw, and in the beginning......of one very young Miss Barbra Streisand.

Having had the opportunity to watch this performance by Ms. Midler was indeed a privilege, and one that does not come along often. This was a choice morsel in a season of fine meals but one that was not recognized by Tony voters as being worthy of even a nod for a nomination.

Perhaps it was due to the run being a 'limited engagement' that allowed the Tony Award voters to rationalize their decision, or the 'West Coast' vs. 'East Coast' theory of not being 'of Broadway' but 'of Hollywood' and thus (so goes the theory) not having earned their stripes or possessing 'the chops' for such a nomination.

Already having won several Grammy Awards, Emmy Awards, nominated for an Oscar, and already having WON a Tony Award previously solidifies the pedigree of Miss Midler most certainly and calls into question that very theory.

This nomination slight was, in my most learned opinion,  completely without merit and Miss Midler's performance was as wondrous to watch as anything I've ever witnessed on a Broadway stage. And while Miss Cicely Tyson's win for 'A Trip to Bountiful' was richly deserved and fully earned, Miss Midler's role in 'I'll Eat You Last' was stirring to the very last puff (and toke).

We should all be so fortunate to witness such an event. 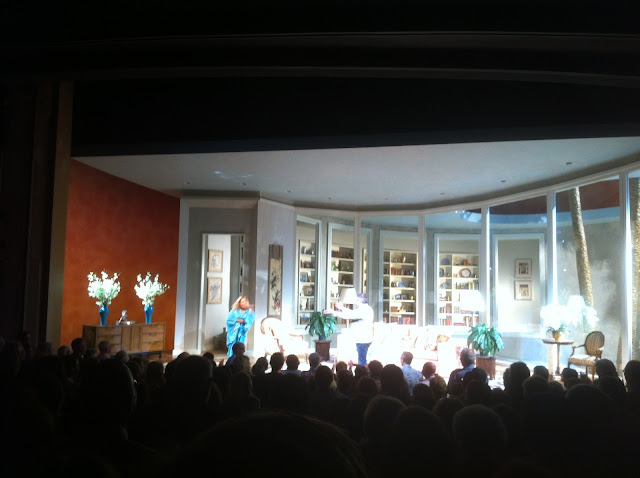 Mr. Crystal? You're next!


Posted by SherlockHolmesReviews at 2:44 PM