Carraba's Italian Grill via The Road thru Mayberry

With a planned rendezvous scheduled recently with Lord Petr and Queen Darla, formerly of Copaigue, NY but now hailing from Spring Hill, FL., and with a VERY large expanse of prime asphalt real estate between their castle
and our own newly relocated shingle (formerly 221-B Baker St., London), we agreed that our clandestine meeting would need be at a location betwixt and between for all concerned.

Regrettably, with such a large expanse from here to there Watson and I have also learned to accept the unfortunate dearth of environs in this expanse in which to partake in the finer 'pleasures de gustibus'. Jointly, we thus agreed to triangulate ourselves at one of the only locations acceptable to both our parties: Carrabba's Italian Grill of Port Richey.

Yet, allow me if you will that before a diatribe can begin on this little bistro, a bit of scrutiny must be duly paid to the actual roadway traversed between North Pinellas County, FL and South Pasco County, FL. leading from Tarpon Springs thru Holiday and into New Port Richey or as I refer to it.....the Twilight Zone.

This three-lanes-wide wormhole passage of US-19 (three lanes on each side mind you!) maddeningly takes all motor carriages moving in a northern or southerly direction from the very leisurely pace found in what the intelligent among us call 'reality' and deposits them into a miles long 'Perpetual School Zone' of travel - and this with nary a bus or child in sight! 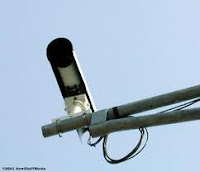 The immediate and deliberate slowdown in traffic is perplexing as one attempts to view the cause of the all but apparent roadblock or obstruction, be it a slow, meandering, no doubt helmetless scooter rider or perhaps a turnip truck losing it's wares off back - and yet none emerges.

Overhead traffic lights suddenly appear numbering perhaps 6 or 100 (I cannot recall the specific number but it's surely closer to the latter) and are immediately visible, are staggered every 4 ft. give or take, and begin to change with no cyclic pattern whatsoever turning almost at will....first one car may pass on the green....and then 10 upon the next cycle...calling to mind the Twilight Zone episode 'The Fever' where this bedeviling action drives one slots player mad!

Additionally, each light is firmly affixed with it's own 'Eye in the Sky', and sometimes more than one; the 'safety camera' which will capture the actions of any and all who attempt to deftly remove themselves from this La Brea Tar Pit of highway in a less than Dudley Doo-Right manner and will then subsequently be further introduced to the inner workings of what is likely to be the New Port Mayberry of Traffic Depts.

Leaving Pinellas County heading north, as one passes slowly by Barney Fife Blvd. and heads towards Aunt Bea Way, a completely different motor aura descends upon  your vehicle ....... the aura of a place where one envisions Floyd the Barber waiting for his first customers while 4 people sit and read the local paper. A collie might bark and warn of Timmy's travails in the well while diners are served food in metal TV dinner trays while preparing to enter the 1950's bomb shelter in the backyard. The times were much simpler and the cars much, much, much slower. 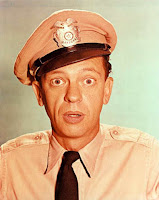 Grown men have been known to scream obscenities into the windshield in a vulgar manner while in such states (or so I've been told by 'sources').

Only over time (and after much regrettable practice) what one must learn to do if one wishes to remain part of the living and not take up permanent residence in the Denbigh Asylum of North Wales, is to  encapsulate the time spent in this Sea Slug stretch of US-19 and simply jettison that pod once safely at your destination, perhaps 9-10 days later.

Breathe deep and align ones chakras to reduce the expanding stress to acceptable levels and endure the ordeal peacefully for the only alternative is to give up those hard-earned evolutionary brain cells and join the Royal Society of Cro-Magnons.....a society already bursting with new membership as the result of this country's current political miasma.

I might compare this mindless torture to standing comatose-like in the line at the Department of Motor Vehicles except that saying so would be an injustice to lines at the DMV! 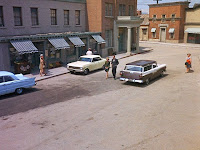 Ultimately, upon arriving at our destination at 6PM on a Saturday night, we were expectedly confronted with the ever-present 1 hour+ wait for one of the choice tables available inside this Texan-Italian Grotto....which is nothing out of the ordinary when working with this establishments' extensive brethren but not a welcome sight here regardless. [Rumor has it that the first Carraba's ever constructed had a waiting line built in as well...but this has not been confirmed.]  So despite the fingernail pulling ordeal endured on the drive to this strip-center end-cap location, we happily found four stools near the barkeep and elected to imbibe the time away in semi-forced alcoholic pleasure.

What surprised us was that barstools were available at all (although we were not quibbling). Yet, despite this joy,  we were further perplexed that after singularly eye-balling the barkeep not so much as a napkin was placed before us for over 5 minutes....and with parched throat and disappearing civility I exclaimed 'Oh, Lord Byron, this is promising to be a trying evening!'

Nevertheless, a quick perusal of the bar area confirmed what I had quietly suspected....that the 20+ quaffers seated woodside, PLUS the adult beverages for the entire restaurant itself were being mixed by this singular spitfire of a woman whom I had eye-balled prior and whose stature rose up in my eyes immediately for her obvious grace under pressure, my own delayed gratification notwithstanding.

Soon enough Ms. Carraba had successfully put us all into her order-taking rhythm and mouths were preoccupied shortly with Stella Artois and Moretti proper.......although I must admit that the 'happy hour' beer flutes (as they newly appear now) may have visited Sir Sid and Lady Jenny Craig for their new slenderness, while much to be desired in all things everywhere.....are certainly NOT welcome in a beer glass! 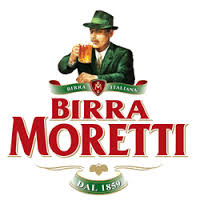 One other observation, minor as it may appear, is that studying the hallmark of the Bloomin' Brand franchise, or any successful franchise for that matter, includes the rigid adherence to standards crafted and tested extensively, thereby eliminating error and chance leaving only a strict focus on those methods and processes that leave a patron happy and an owner with a profit. These methods and practices are passed on to the employees of the establishment time and time again so as to ensure their guidance and acceptance.

What those standards most definitely do not include is the passing of dirty bar-back tubs across and through patrons eating their hopefully delicious dinner while sitting before the taps at the U-shaped bar....an act that was most definitely witnessed by this observer tho oblivious to the barkeep. While this might be a difficult period to be operating any restaurant establishment successfully while maintaining total control of all aspects of every operation (a feat I myself would most certainly fail at), there are certain courtesies that should be ingrained in common sense and this one slipped thru unabashed.

The cracks in the system were evident.....and continued.

So six very slender flutes (8oz? 10oz?), a house Vodka-Cranberry, and $40.00 later we were being called to a table after a wait that was delightfully much shorter than expected (or it simply 'seemed' that way with the gratifying albeit rich intake of alcohol).

Now, upon the walk to the table I noted that this particular Carrabba's appeared to lack the original zesty Italian feel imbued in the chain's inaugural sites.... and the below observations are for this one location only of course, not an entire franchise. No, this one gives the dining visitor a more 'Village Inn' or cafeteria ambience and one with a much brighter lighting treatment than a Carraba's should have on the inside (in my estimable opinion - and yes, I did say 'The Village Inn').

Still, the proof is in the penne and that's the focus of where we were now turning our attention.

One recognized offshoot of a lengthy wait for a table is the development of the deep hunger pangs that envelope a group soon after which then allows for the rapid ordering of entrees with very little circumstance.

Our waitperson, a young lad with a barrel chest and a goatee, no more than 25 years of age, having taken everyone's order simply guffawed when I asked for the 'Chicken Bryan Texas' thinking this to be a malapropism of the highest order on my part.

Yet he sat wide-eyed as I carefully explained the original name to this wonderful dish and it's derivations in Bryan, Texas...the home where the Familia de Carrabba settled upon arriving from Sicily. Subsequently shortened to Chicken Bryan on future menu's, the import was not lost on our fine friend.

Arriving fairly soon after our salad/soup choice, the entrees were as exquisite as any and visually mouthwatering as well. Yet with three entrees delivered we waited almost five additional minutes for Lady Darla's Seafood Cannelloni....a fact that would be unheard of in a more tightly sealed ship......alas, we were still taking on water.

Memory is a tempestuous lover and mine did not fail me here. The Chicken Bryan is and always has been a special selection at Carrabba's, one that encapsulates both the Texan and the Italian roots of The Damian family of Houston.

The perfectly grilled and succulent chicken breast, the lemon basil butter sauce draped over goat cheese and sun-dried tomato's, all perfectly done exactly as they have been done for over a decade and this time was no exception. Every delightful bite a delicious memory unto itself. 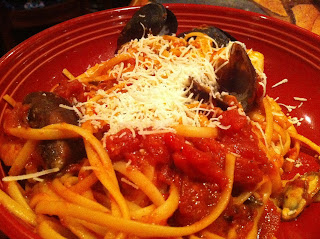 All was as delicious as I'd remembered yet with the Chicken Bryan yet the goat cheese seemed to be of a slightly blander variety. It WAS soft but lacked the special bite that finely made goat cheese can deliver (and used to deliver on this recipe). Explained as perhaps  the difference between perhaps skim milk and whole milk goat cheese, or a different cheese purveyor, but whatever the reason it was of noticeable difference for the bites simply lacked a special......oompf.

Also, staring at the Chicken Bryan I couldn't help but think that it had also gotten lighter, perhaps losing a side of pasta, no? Watson? Care to opine? Perhaps a 'victim to the times' I wagered? A reduction due to the Potato vs. Pasta argument? Did too many simply not eat both?


Perhaps I was imagining things but I think not.

The malady all the plates suffered from was they all seemed smaller than in the past. Not that the quality or speciality was any different, there just appeared to be less of it. And that difficulty was made paramount upon a $17.20 price.

Johnny and Damian are no doubt very happy with the initial onslaught but the tinkering that OSI has done, no doubt in order to remain profitable, have lessened this brand a Queen's scepter .....and that's too bad for what once was a fine experience is now made simply......good.

And lastly, might I ask what happened to the pleasant Italian lessons playing on the speakers in the men's (and ladies?) loo? .... Again, it was a detail such as this that had set Carraba's apart from the humdrum yet today it was just another slightly leaky vessel.

Posted by SherlockHolmesReviews at 8:09 PM