The Wrecking Bar Brewpub - Gastro and Gourmet in Atlanta, GA

One of the finer pleasures in life is the experience of combining (in triplicate no less) the advent of fine libations and elixirs with excellent food selections, both then held together by the camaraderie of fine fellowship. Luck was mine recently as I had just such an opportunity at The Wrecking Bar Brewpub in Atlanta, GA. 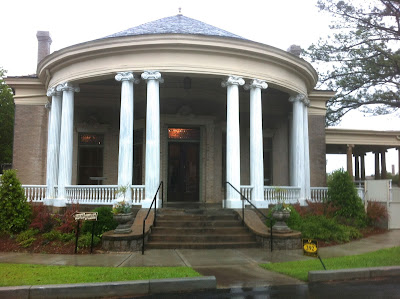 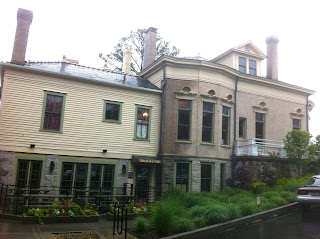 With our commercial enterprise for the day accounted for I drew upon my limited social graces and attempted to pull two of my disparate worlds together in a single location for a bit of impromptu frivolity: Lord Michael William and Lady Elizabeth, the soon to be betrothed members of the Royal Family, and, on the numbers side, the Duo of Seated Commerce - Lord Frederick of Cucamonga and The Earl of Schindelholz, with whom I have been spending an inordinate part of my days with of late! And with seven cities in nine days I was not the least bit tired for I am never tired by my investigative work. However, it is mere idleness that completely exhausts me! 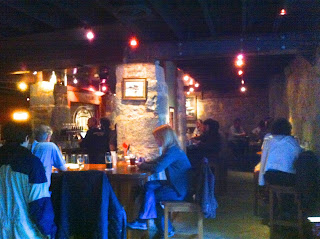 The Wrecking Bar is hidden in plain sight on the west side of Moreland Ave. north of I-20 and Dekalb Ave. and south of Little Five Points (an overwhelmingly disparate environ - part South LA and part SOHO - both the NYC and London versions!).

I say hidden as what one first encounters is what appears to be The Jefferson Memorial standing regal and proper yet abandoned at the same time. Gaining entry via Moreland will prove difficult however as signs appearing 'afore the only drive ON Moreland profess 'Exit Only'. One will soon need to maneuver their way to the side entrance on Austin Ave. for parking lest you find yourself foraging the local streets for ancillary auto accommodations (Valet is sometimes offered and necessary).

The Wrecking Bar, aptly named for this building's predecessor occupant of 35 years, 'Wrecking Bar Architectural Antiques', has created a splendid mix of old and new with fine ales and such brewed right on the premises along with a wonderfully eclectic melange of dining tastes both southern in delicacy and hearty in nature. 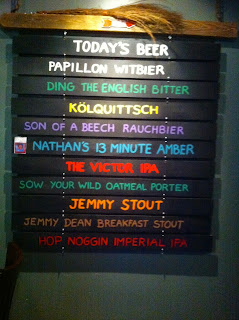 The mead's themselves are something to behold with wonderful concotions such as 'Ding The English Bitter' and 'Sow Your Wild Oatmeal Porter' as well as 'Son of a Beech Rauchbier' and the downright pedestrian 'The Victor IPA'.
This revolving series almost demands numerous visits to savor and temper the variety in the manner most accommodating...slow and measured.

The Wrecking Bar thus does a splendid job of not only giving the fine beer connoisseur a wide selection of taste experiences to choose from but also allows the uncurated to partake in the pleasures of the palate without suffering the further indignity accompanied with the dreaded malady of the 'unknowing purchase'...that bromide that acts like Kryptonite to the youthful and egoistic Superman. There have been rumors of Georgian Tribesmen (from UGA no doubt) that were felled by the strength of brews less in stature than those found here. 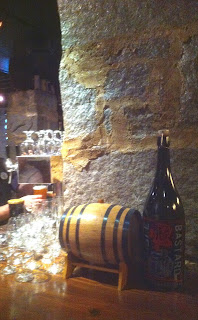 The matrix of choices are also thankfully referenced and cross checked with detailed descriptions of body and taste along with heady statistics including the all important Alcohol by Volume (ABV), levels starting here at 4.5% with the 80 Shilling Porter and topping off at better than 10.5% for the Hop Noggin Imperial IPA....along with a fine host of other examples awash in between.


Yet the alchemic success of a GastroPub sometimes resides in the non-beer side of the drink menu and here The Wrecking Bar also excels. With eighteen (18) different bottles of Red and White Wines to choose from, the true gourmand of all manner of alcohol is soon overwhelmed by the depth and breadth of the available spirits - there are over 44 Bourbons alone, 7 American Whiskey's, 18 Rye's, and 17 Single Malt Scotch's including the newly renowned Japanese Yamazaki 12yr.

Yet still not content, they continue on with blended whiskies, both Canadian and Irish, Tequila's, Rums, Vodkas, and more Gin's than any Plymouth Juniper bush could possibly put forth, along with another  34 different Cognac's, Brandy's and Cordials. With this selection offered (and many partaken!), and Special's not yet perused, it's a wonder this post revelry report is being written at all given my predilection towards all things alcoholic ...... and mind-altering.

With our guests all having chosen their respective  pours, including the nearly effervescent 'Bourbon Peach Smash' ($9) which hosts local Last of the Season Pearson Farm Peaches, Four Roses Bourbon, and fresh mint flowers (Good Heavens!), we began piecing thru the plethora of foods that immediately caused us all to give great pause to the moment.....such was volume of our indecision.

With kismet on our side, our joint indecision was interrupted when Prince Michael stepped up and ordered the sharing friendly plates of Wrecking Fries with three dipping sauces ($5) and the Kale Ale Fondue ($8), served with Bernhard's Bavarian Pretzels, radishes, carrots, and apples all for dipping in the heady mixture of cheese and ale...

And not content with the Fondue, and with a gentle but knowing nudge from Lady Elizabeth, we also ordered further the Cheesy Beer and Tillamook Rarebit Soup ($8) and the Beet Salad ($8) with Red and Roasted Golden Beets, quinoa, carrots apples, and other naturally crunchy endives with Bourbon Raisins, arugula, and Georgia Pecans. This mixture, and many others festooned throughout the menu, would please any Vegan for it's deliciousness was unparalleled.

Our waitress, an ebullient redhead, was nearly perfect with her mix of attentiveness and menu knowledge and managed our experience with aplomb. This is not an easy task and it's management is to be applauded.

Yet soon our experience was taken to new heights with the delivery of our chosen entrees for these were no beer hall fixings but full out pictorials straight from an issue of Bon Appetit.

The delicious Pasture Pork Tenderloin ($15), with field peas, turnips, padron peppers, and smoked Gouda grit cake was a warmly received fall platter which had Lord Frederick's attention upon arrival while the Painted Hill Flat Iron Steak ($17) on smashed potatoes with mushrooms, swiss chard, and chimichurri was nearly Dali-esque and gave Lady Elizabeth the strength to continue forward on her quest to become Queen.

Prince Michael, sporting the hunger that only a Cross-Fit ordeal can bestow, ordered the almost dainty North Carolina Pulled Pork Sandwich ($8) with homemade pickles and Cole Slaw along with a side of Wrecking Bar Mac-n-Cheese ($4). 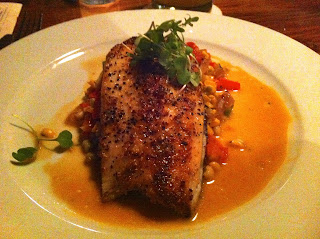 This mix of southern vitality and nuance continued with the arrival of two servings of Koln Malt Encrusted NC Trout ($15) for The Earl and for myself. Pan roasted and laid on a butternut and brussels sprout hash, with a roasted poblano grits side the plates simply amazed in their splendor and in their costs for what was delivered certainly was worth more than what was being asked! Certainly!


And lastly, not content with simply allowing the evening to mellow and the fellowship to anneal, Lord Frederick chose this opportune moment to announce that he had discovered that it was my own birthday and that he would have no part in NOT celebrating this event! (Oh how I hate pomp.......the circumstance is not as bothersome but the pomp will drive a man insane some evenings!)

Yet again, our wonderful hostess proved her worth for she quietly and professionally delivered both a Jemmy Stout Sundae ($8) made up of Vanilla Ice Cream and a Jemmy Stout syrup with nuts and cream, and a 'Wrecking Bar', the proprietors version of a Kit-Kat laid subtly before us.

Neither stood a chance!

The only hint of impropriety was the delivery of the famously delicious Moscow Mule in a small parfait glass rather than it's customary Copper Cup......but even with this very small indiscretion The Wrecking Bar exceeds on all levels and has earned it's place at Sherlock's Multiple Visit list.....with still more visits surely to come!