Luna Del Sea Steak and Seafood - In a pinch, it was a snap!

A phone call from an former global financial croupier had me on a plane to Baltimore recently on a case of international intrigue involving the peculiar nature of the specialty foods industry, a worldwide sales network consortium, and a tale of the world's finest Basmati rice, rumored to be imported from India and thus the impetus for the call.

Sir Archduke Shawla, late of Lebanon yet now residing in the New England area, requested my professional opinion on a case that he had been toiling on for several months (and had it nearly solved himself).

Yet, for confirmation purposes and perhaps a bit of board- sounding, he had requested my imprimatur before moving forward with his own previously devised strategy.


What my learned investigative experience has told me over the years (coupled with quite a few instances of rake-stepping) is that the solution to any case can only be found by religiously following wherever the clues take you…and taking heed OF those clues no matter WHERE they take you!

And this case was no different.
After confirming for the Archduke that indeed the Basmati Rice from India was far superior to any rice I've experienced to date (having sampled rice during sojourns all over the globe) and that the network in question was fully capable of handling it's United States distribution, we retired for the day and set off in search of a watering source of joint celebration.

With only a very short amount of time before the return flight back to Baker St., we quickly settled on a fine example of all that the city of Baltimore has to offer - and we did so without moving more than one block from the Baltimore Convention Center: Luna Del Sea Steak and Seafood Bistro, posited directly across the street.

On this particularly cool day we elected to sit outside on the side patio, where one is impressively ensconced in a near bubble of peace from the bustling traffic on Pratt St., which is intriguing in it's own right as it was rush hour AND the local ballers, The Orioles , were tearing tickets not one street down for their evening game.

The Archduke and I were immediately greeted by one of the fine waiters there employed whose visible immediate focus was to slake our obvious parch.  A fine young man indeed! 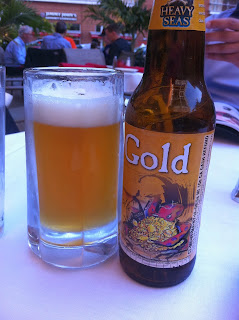 And as a test of this waitpersons rectitude, and a bellwether of his skills nonpareil moving forward, I asked that he choose a local brew of his own design for myself.

Throwing the unexpected curve will sometimes unbalance the less capable servitor, resulting in either their visible indifference to the request (evidenced by a noncommittal answer) or deliver the verbal rumblings of the less equipped staff. In this instance neither of those events occurred for he   correctly asked first for a disposition towards heavy or light and if there were any allergies present before rewarding me with a fine choice - the Heavenly Seas Breweries Golden Lager which I had not had before and enjoyed thoroughly if for the simple accomplishment of this fine steward (which I also later learned had garnered awards at The Great American Beer Festival in Denver, the Pantheon of U.S. Festivals.)

With a long day of convention hall walking behind us, and fine ferment now coursing through us, we moved to request the specialties of the house, those dishes that would ensure our satisfaction and leave us with nothing but glad tidings to bestow upon all others within our earshot.

Soon enough the Archduke was spooning a succulent Maryland Style Crab Soup which was festooned with mushrooms and other vegetables along with Maryland Crab in a delicious broth, something not usually espied on such menu's accustomed to Clam Chowder - Red or White, or a Lobster Bisque. So ubiquitous, making this dish all the more exciting. And with a half-dozen oysters for myself, albeit without a serving of horseradish, we were soon working down our lingering hunger.

However, it was the arrival of the entree's we were looking forward to!

And as quick as a hunted Royal Grouse, a Salmon Oscar with a Crab and Corn Hollandaise Sauce was placed before me while the Signature Dish of Luna Del Sea, the Crab Stuffed Lobster Tail, was set before the Archduke. The aroma was palpable and the deliciousness wafted throughout our olfactory senses so as to render us nearly senseless, such was the delight.

And while the portion on the Salmon Oscar was a bit 'light' for the somewhat hefty price-tag, the promise and the delivery was as foretold. Similarly with the Crab Stuffed Lobster which 'appeared' to have been left under a heating element or broiler for it's ubiquitous scorching a hair longer than necessary, it too delivered upon its promise and did not appear to hinder the Archduke's appetite in the least.

Posted by SherlockHolmesReviews at 11:06 PM